I guess it’s about time I post about the Irish Soda Bread I made a while back. Leading up to St. Patrick’s Day, I searched and searched for the perfect recipe, and I found one that looked rather promising. However, just before I was going to make it, I got a different recipe from a friend, who said it was amazing. So my plans changed because I just had to make this other one. However, I have no idea where the recipe comes from because I only got a picture of the ingredients and steps from the cookbook it’s in.

This bread came together pretty easily, albeit extremely messily. My hands were absolutely covered in dough despite liberal flouring, and the counters and floor looked a bit worse for wear afterwards, too. 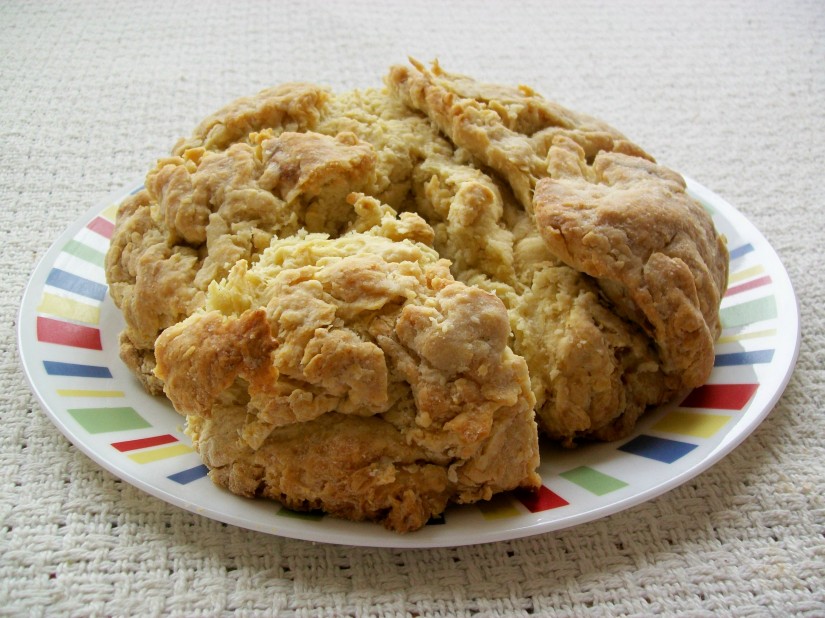 Mine was definitely a more rustic-looking soda bread, because I might have taken the “don’t knead it until it’s smooth” bit a tad too far. Oh well. The interior was super fluffy and moist, so I’ll sacrifice aesthetics for taste for the moment.

Hot out of the oven the bread looked delicious, and it was painful to have to take pictures before digging in.

I think I’ll definitely break out the soda bread every now and then, since it’s a bread I know I can make without messing up. I’m still not BFFs with yeast yet, but I think we’re slowly becoming more fond of one another, as evidenced by the light and fluffy pizza I made on Sunday. Baby steps, people, baby steps.