Biscoff consumption has begun to decrease in the suite as of late. No, it’s not that we’re getting sick of it. It’s the exact opposite, actually, we still love it and want to take baths in it every day. The reason we haven’t been eating it is far more depressing: I can’t find it at Trader Joe’s! The unthinkable happened so much sooner than I expected. I went to the store a few days ago and went to its supposed location, but it was no where to be found! You have no idea how heartbroken I was at this discovery. There were so many things I hadn’t made yet and so many spoonfuls I hadn’t consumed. Oh TJ’s, why must you break my heart into a million pieces. Looking at prices on Amazon also broke my heart, because even though I love it, I will NOT pay nearly $10 for a jar. No way. I can’t believe my love affair with Biscoff  has ended after only one jar. I’ll look again when I go shopping next week, but I won’t be too optimistic, so that my heart doesn’t break all over again.

Despite the sorrow we have been experiencing, we’ve had to persevere and get our work done. Midterms are over and the final spring break of my life has officially begun. This is my last official school vacation, and I’m having some mixed feelings about it. I still have April vacation when I don’t have to go to work, but this is still the end of an era for me. Seventeen years of schooling is almost over and it’s absolutely terrifying to think that I’m almost a real adult. Almost a real adult who will soon (HOPEFULLY) have a real job and a real apartment . . . and real bills (yuck!).

But I’m not going to dwell on that anymore right now. Instead I want to celebrate my victory over the dreaded kitchen demon yeast. I have a very mixed history with this leavening agent, and I’ve never really had much luck with it, save for when I make cinnamon rolls. I’m happy to report that that all changed with last night’s dinner.

I was checking the usual baking blogs in the morning, and what did I happen to find but the yummiest looking pizza ever! How Sweet It Is never fails to disappoint, and this Garlic Bread Pizza Crust takes the cake! I was a bit wary because of the yeast, so just to be sure it would work and rise well, I went to the store (not Trader Joe’s) and bought a different brand entirely, and after the results I think I’m going to stick with it from now on. I also took the time to meticulously measure the temperature of the water (yay multipurpose candy thermometer!), so that could have been a factor in my favor as well.

The dough was so soft and pliable and easy to manipulate. It came together really quickly, but it was a bit on the sticky side from time to time as the flour worked into it from the kneading surface. It rose amazingly well during the hour and a half wait time, but it was torture to have such a great smell in the kitchen that I couldn’t devour for such a long time. That’s another thing: this dough smells phenomenal! The combination of yeast, olive oil, honey, and basil is heavenly! 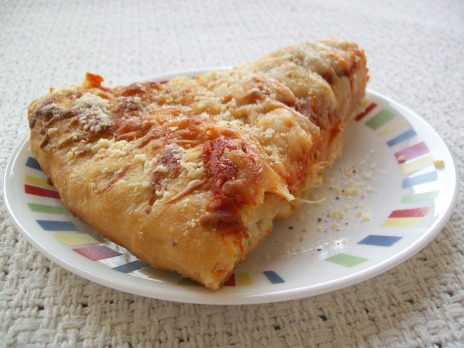 After the rising period, I was hesitant to start rolling out the dough. I never have the best luck with getting dough into the shape I want, but once again this dough surprised and pleased me to no end. But silly me disappointed myself. I plopped the dough out of the bowl and onto the floured counter top. It plopped into a PERFECT circle and it was SO easy to press out. But . . . it was too soft to transfer to the baking sheet, so I lost the perfection and had to do it all over again on the sheet itself. It wasn’t as perfect this time, but that doesn’t really matter. It’s more important that I’ve learned from the disappointment this mistake resulted in, and I now know what not to do in the future.

The pizza was already gigantic on the baking sheet, but after rising again and baking it was INSANE! It spanned the width of the pan and was about an inch and a half thick in some places. Now that’s my kind of pizza! All I could do was stare at it for a few moments with my “It’s a mountain!” suitemate. We were in awe!

There are no words for how well the smell translated into taste. The crust was everything I expected: fluffy, tender, flavorful, buttery, GARLICKY, and cheesy. The cheese and sauce were a bit lacking in flavor though, so I sprinkled on some more Parmesan and cracked some garlic pepper. Much better. I think this is definitely a crust that works better with some additional salt and punch, so I’ll have to expand my pizza cheese horizons beyond shredded mozzarella. I also probably shouldn’t use my go-to spaghetti sauce on it either, because it needs a sauce with more depth of flavor. Next time there will also definitely be pepperoni and maybe a drizzling of olive oil in the last few minutes in the oven. Looks like I’ll be experimenting soon! 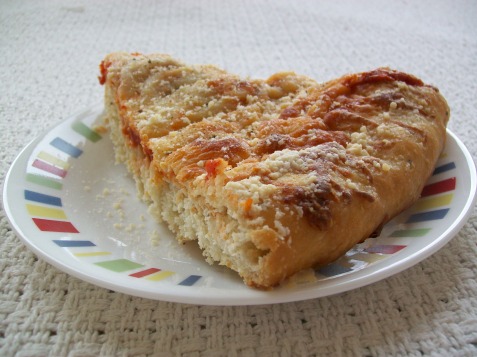 You also wouldn’t go wrong with just making the dough alone and bathing it in extra butter/garlic/Parmesan instead of making a pizza. I just wanted to keep eating the outer crust, cheese and sauce be darned! It’s so addicting!