The baking bug really hit me hard in the days before the semester began. I was home from work by 4pm, and I had the rest of the afternoon and evening at my disposal. I also had a roommate who really loves baked goods. Solution: cupcakes! I found this recipe on Annie’s Eats and quartered it for my purposes. It is originally intended as a cake, but I wanted cupcakes instead. But there’s a very important lesson to be learned from this. 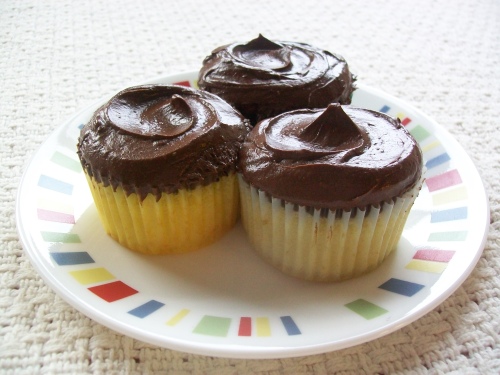 You always dream of the perfect recipe that will result in flat-topped cakes without having to slice off the rounded portion. This is ones of those recipes. But that’s a problem, you see, because with cupcakes you want domes, domes, domes! A domed cupcake this is not. Lesson: do not use a scratch CAKE recipe for CUPcakes. It’s not the end of the world though, because the flatness just means you can use the remainder of the wrapper to support a gigantic pile of frosting, beyond what is physically possible to heap onto a beautifully domed cupcake.

Aside from not doming, this yellow cake recipe is a keeper. The flavor combination was delicious, and the frosting was so rich and perfect, and definitely not sickeningly sweet. I’m always on the look-out for a good yellow cake and chocolate frosting combo that doesn’t require nearly a dozen egg yolks, so I’m glad I found this one. It’s such a classic combo and I get cravings for it at the most random times, so it’ll be nice to have a relatively low-maintenance recipe to fall back on. The large quantities of chocolate might pose a problem from time to time, though.

I also used this baking time to practice my frosting technique. I bought myself a small spatula at Michael’s when I was home, and I tried my best to replicate the technique I learned when I baked cupcakes at Butter Lane. It’s been a few months, but am I still “the best froster ever!”?