I did it. I finally cut into my birthday cake yesterday. After hours and hours of waiting, one of my friends finally came down to my dorm to experience this with me. I can’t even call it a cake anymore after those first bites. It’s BEYOND cake. It’s . . . LOVE! That’s the only way to describe it . . . well, I suppose “heart attack” would be a close second, but let’s not think about that right now. I’m in agreement with my friend on this one when she said “It’s your birthday. Calories don’t count.” (Shhhhh, I know it was after my birthday, but it was the first piece of my birthday “love”, so the statement still stands.)

It was so hard to cut into the cake because it was so dense and thick, not to mention cold from being in the fridge for so long.

I could barely finish my piece because there was just so. much. chocolate. The ganache layer was a bit overwhelming, but the light and fluffy mousse layer balanced it out a bit.

I honestly don’t know if I can ever make this cake for myself again. I definitely need to have a huge group of people in mind if this ever hopes to be made again. SO. MUCH. CHOCOLATE.

After the first bite my friend said she didn’t need a man. I’ll take that as a compliment. 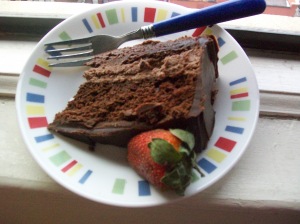 There’s still so much left. We barely made a dent in it. I’m gonna die a chocolate death to end all chocolate deaths. I don’t care that my friend said we weren’t sharing this cake, it’s coming to either Irish class or folk group on Tuesday. It needs to be gone before it goes bad. Leaving it to go bad would be even worse than eating it all myself.

One final note: when you eat this cake, you don’t need to eat anything else for like 3 days. You’re that full. I didn’t eat anything the day I made it (the chocolate aromas were enough for me); I pretty much just ate some eggs/English muffin and my piece yesterday; and today I’ve eaten two super mini bagels with peanut butter, mac and cheese, and a small piece. STILL STUFFED! And yeah, my diet is still crap. Needs to change real soon or my stomach will revolt against me. Maybe I should make those pomegranate white chocolate chunk cookies tomorrow. You know, to consume some fruits and oats and all that.

1 thought on “A Lucious Chocolate DEATH”