After the past few days, I have needed to bake like nobody’s business, so I started my Bi-Weekly Baking Bonanza a bit early. I wasn’t able to make my brownies Thursday night because I wrongly assumed that my suitemates would be clearing out of the common room. That’s what you get when you assume things. . . .

For my first entry in my Bi-Weekly Baking Bonanza, I wanted to make the Homemade Oatmeal Cream Pies that I found on Beantown Baker’s blog, which she found on How to Eat a Cupcake. I thought I was so prepared, and I went to the store with a list of ingredients I needed (gelatin, light corn syrup, baking powder). I got those, and it turns out that I only had half of the amount of the most important ingredient! Silly, assuming me thought that I had more than enough quick-cooking rolled oats, but once again, I thought wrong, and therefore this time around I failed part of the bonanza.

This baking is not only supposed to get me to try out new recipes and techniques, but to also teach me to be patient and take the time to run down all the ingredients required and physically check to make sure I have the necessary amounts. In the end I decided to substitute in the other half of the rolled oats with steel-cut oats. I was a bit hesitant to do that, but in the end it worked out fine. I never ever want to have to do that again though, so the first thing I’m putting on my next shopping list is ROLLED OATS (and all-purpose flour, because I’m now running *really* low). I still can’t believe I didn’t have enough; usually I have rolled oats coming out my eyeballs! I guess it’s punishment for not checking before I had EVERYTHING all mixed up and ready to go into the oven.

The first thing I want to note about this dough was that it was extraordinary thick and hard to manipulate. I had a heck of a time mixing in the oats at the end. I think I must have done something wrong, but I really don’t think I mixed the flour too much and developed too much gluten. I didn’t see anything on Beantown Baker’s blog about this issue, so it must have been something on my end, I just don’t know what.

The overwhelming stiffness of the dough resulted in a VERY puffy first batch of cookies. I think maybe the baking soda and water mixture didn’t get sufficiently mixed into the dough, so there was nothing to counteract the baking powder that was sifted in with the flour. The cookies did not spread out at all like in the pictures on those other blogs, which rather disappointed me. For the second batch I only put three on the pan and I flattened them down myself before I put them in. Those ones came out much better, but they still didn’t look like the other bloggers’. So for the next batch I turned the temperature down to 400 degrees, put two tablespoons of dough together and patted them down into thinner disk shapes. I was very pleased with those results, and they were finally starting to look like everyone else’s–still a little on the thick side, but much improved. 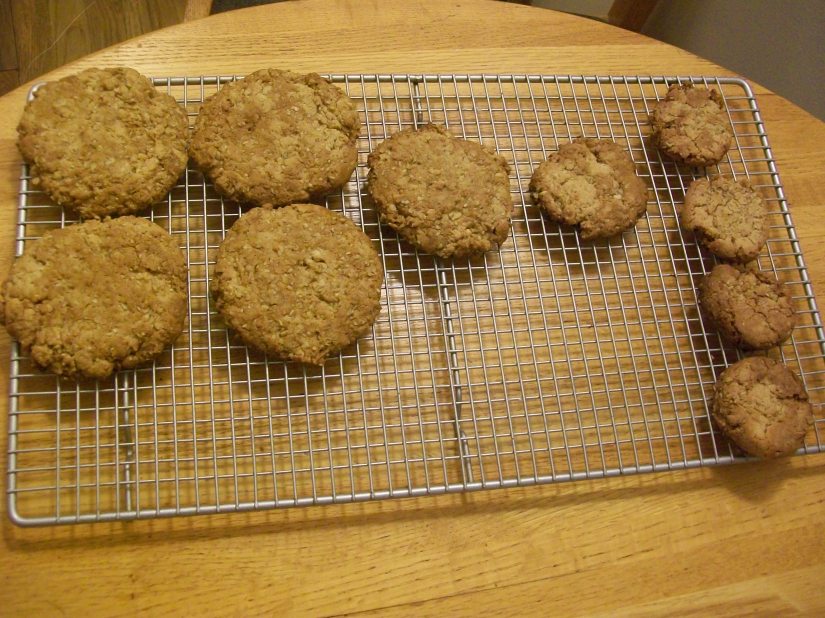 Those other batches didn’t go to waste though, because the cookie itself is delicious both by itself AND with an added spread of peanut butter–they just weren’t suitable to be turned into the “ideal” oatmeal cream pie that I was going for.

It’s a good thing I wrote this first half of the entry before I started making the filling, because I would not have been nearly as happy after the fact. That darn filling nearly killed me and my little mixer (it did actually kill my shirt though, because I got so much stuff all over it). I should have known that this baking attempt was not going to be entirely pleasant just from how stiff the dough was and how dissatisfied I was with the initial cookie outcomes. Before I even started heating the ingredients for the filling I failed another aspect of the “Bi-Weekly Baking Bonanza” by not reading the ingredient amounts properly. Rather than mix 4 teaspoons of gelatin with 1/3 cup of cold water, I mixed the gelatin in 3/4 cup cold water; I accidentally read the 3/4 of a cup as water, rather than as sugar. Because of that mistake, I wasted nearly two packets of gelatin, and no, that stuff is not terribly cheap. Thank goodness I bought the four-pack.

Once I got it mixed with the correct amount of water, I heated up the sugar, corn syrup, and water. That went fine, as did mixing in the gelatin/water mixture. The trouble came after I was beating all of that up to make it marshmallow-y. As I was adding the powdered sugar, it was getting so thick that my little hand mixer couldn’t handle it. The filling was going up the beaters and toward the motor, greatly slowing it down. In the end I mixed it a bit with a knife, but I had to torture my poor mixer one more time when I added in the shortening. I didn’t plunge it all the way down to the bottom, so I had to go back and mix it some more by hand to make sure the shortening was well-incorporated.

I set up filling shop on the two tables in the common room and proceeded to use a rubber spatula to glob piles of filling onto the cookies. I think that must have been the easiest process of the entire afternoon. I ended up with 9 acceptable sandwiches and some open-faced ones of various sizes. Not quite the 24 sandwiches the recipe said it yielded. I did, however, use twice the amount of dough to make each acceptable cookie since they wouldn’t spread, so that explains the shortage.

After sitting overnight in my microwave and wrapped in plastic wrap, they’re not quite the soft cookies that I was told they’d be. They’re a bit on the crunchy side, but they’re still really good. The filling isn’t quite how I remember the packaged pies to be, but that might just be because I haven’t had one of those in YEARS. All in all it’s a good treat, but unless I can learn from my mistakes this time around (and can get a stand mixer), I probably won’t be attempting these again anytime soon. It was just too much work, which resulted in a mess of epic proportions and a very filled sink. 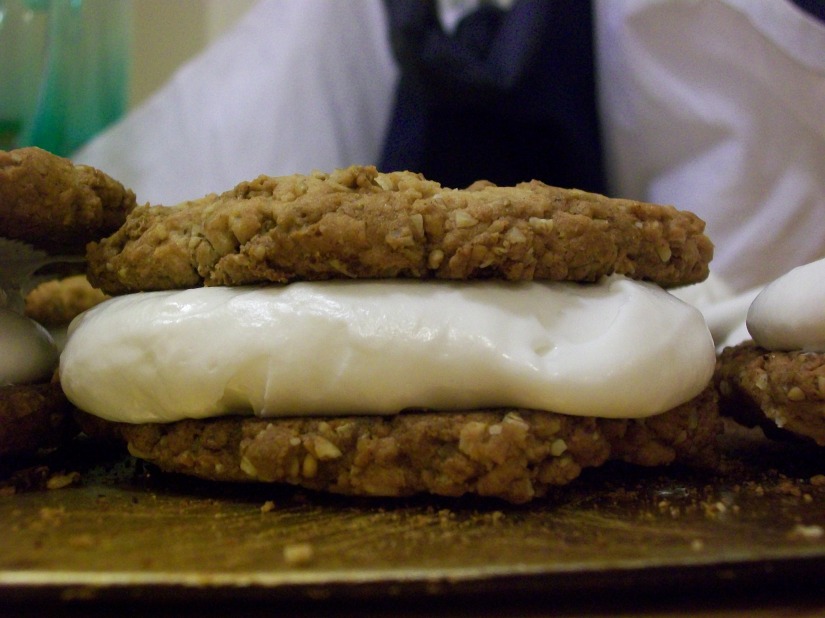 One thing I definitely learned from this experience is that I really want to take pictures of the ENTIRE process and not just the finished product. I generally like posts in other blogs better when there are a lot of photos, so why wouldn’t I post the same way? I also love photo-by-photo instructions, so why not give it a go myself. If only I had better lighting in the kitchen, but I’m still going to attempt this. In fact, I’ll add it to my list of goals with these baking challenges.

GOALS OF THE BAKING BONANZAS:

1. Read through the ingredient list and physically check that I have EVERYTHING in the proper amounts.

2. Read through the instructions at least once before taking anything out.

4. DON’T MAKE SUCH A HUGE MESS! (This one’s really important.)

5. Take LOTS of photos of the ENTIRE process, from start to finish.

6. SLOW DOWN and ENJOY the baking process. 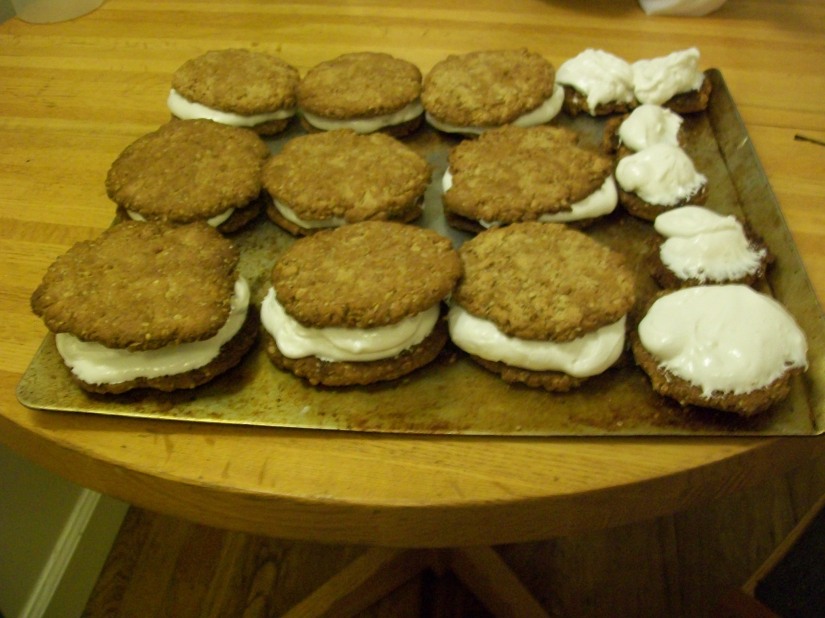