I made it back Saturday mid-afternoon, and for once my parents were able to find a parking spot near my dorm. We unloaded, unpacked, and parted ways, leaving me to my own devices in my empty suite. That empty suite could only mean one thing–BAKING! My baking cabinet was suitably stocked, and I got to it very quickly. I combed through my bookmarked recipes and settled upon a Dorie Greenspan recipe I found as a Tuesdays with Dorie entry on Amy Ruth Bakes: the Dressy Chocolate Loaf Cake. I had been eying this cake for some time, but I didn’t have a proper loaf pan to bake it in, before now. A couple of weeks ago I went and bought some glass mixing bowls, a loaf pan, a muffin tin, and a round cake pan. When I got back, I realized that as my bake-ware collection is slowly being completed, my kitchen is quickly running out of storage space. It’s like a puzzle–this can go here, that can go there, but that can’t go there, so where will it go? My only answer is I don’t know. Thank goodness I’m so tall, because I’ve been able to use the space on top of the cabinets because no one else can reach or has shown the desire to stand on a chair to reach up there.

Generally I am skeptical of recipes that only call for cocoa powder, because it doesn’t give me as satisfying a chocolate taste as it would if I used melted chocolate. I usually add additional chocolate to those recipes, but for some reason I didn’t want to this time. Search me for as to why; I have plenty of chocolate chips I could have used.

I’m not sure what the actual consistency of the cake batter is supposed to be, but mine was as light and airy as a mousse. Granted I had to make a last second substitution because, silly me, I forgot I didn’t have any eggs. Instead, for each egg I needed, I mixed together 2 Tablespoons of water, 1 Tablespoon of oil, and 2 teaspoons of baking powder. I really need to start checking for every single ingredient before I even think about beginning anything. I wonder if the substitution had any effect on the batter. I’ll have to find out by making this again sometime, but after everything is mixed as the recipe states, I’m going to add some melted chocolate.

The cake baked up beautifully in my new pan. A couple of corners were darker than the rest, but what can you do. I think I took the cake out at the perfect time, because when I cut it it was super moist. 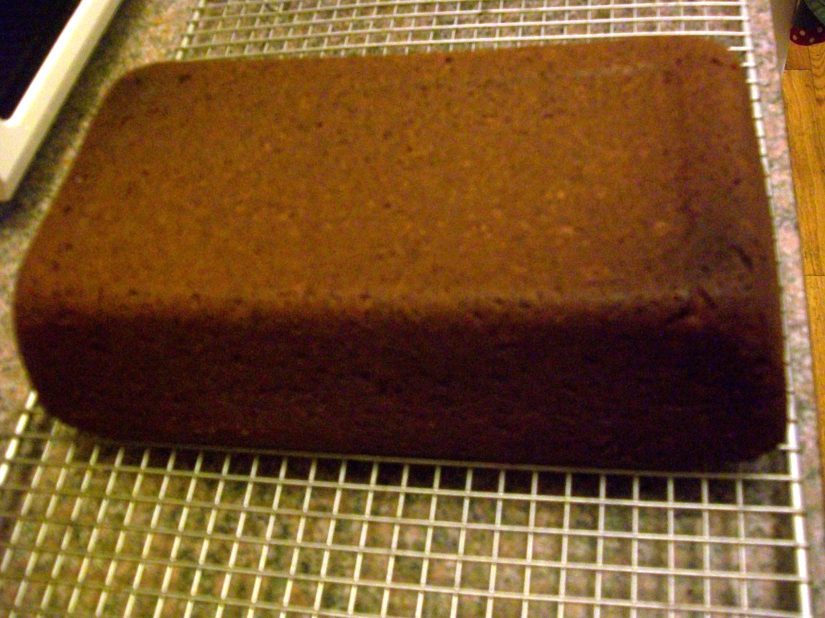 It was a painfully long wait for it to cool down to semi-room temperature, and I probably should have waited longer, but it was getting late, I was exhausted, and I wanted a piece of cake gosh darn it. I miraculously had just enough raspberry jam for the filling. Next time I might try it with strawberry and add a little more because the flavor wasn’t as noticeable as I would have liked.

I also had just enough sour cream left to make the frosting. I had never before used only melted chocolate and sour cream as a frosting, and I thought it was an odd combination at first. It’s actually surprisingly good. I like the tang the sour cream adds.

The next thing I need to add to my kitchen collection is a long, flat plate for cakes. I know the cake sunk a bit from my poking a hole in it during the baking process to check it, but the plate just exacerbates that and does nothing to add to its levelness. I know that’s a nit-picky thing to notice, but when I think of loaf cakes, I think of long, flat, level cakes, and this attempt does not quite fit that profile in my opinion. 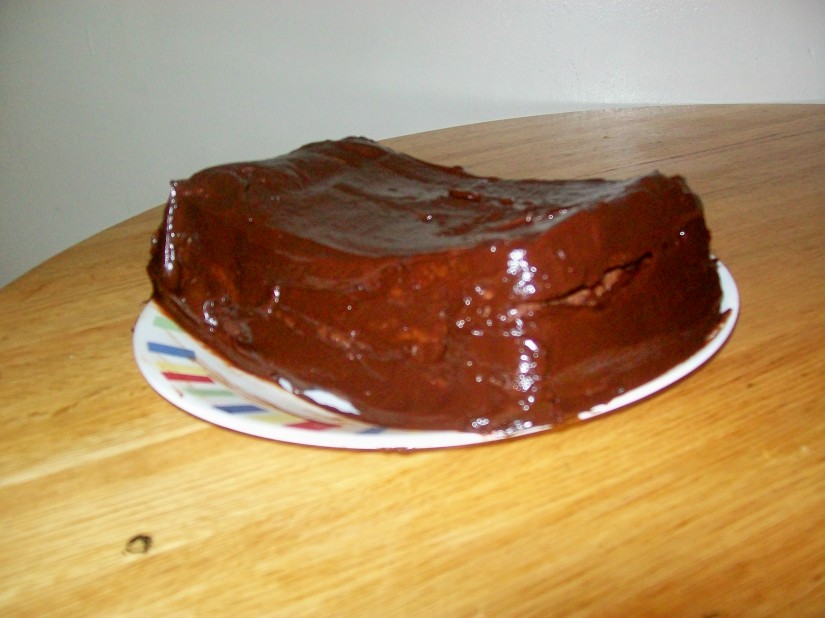 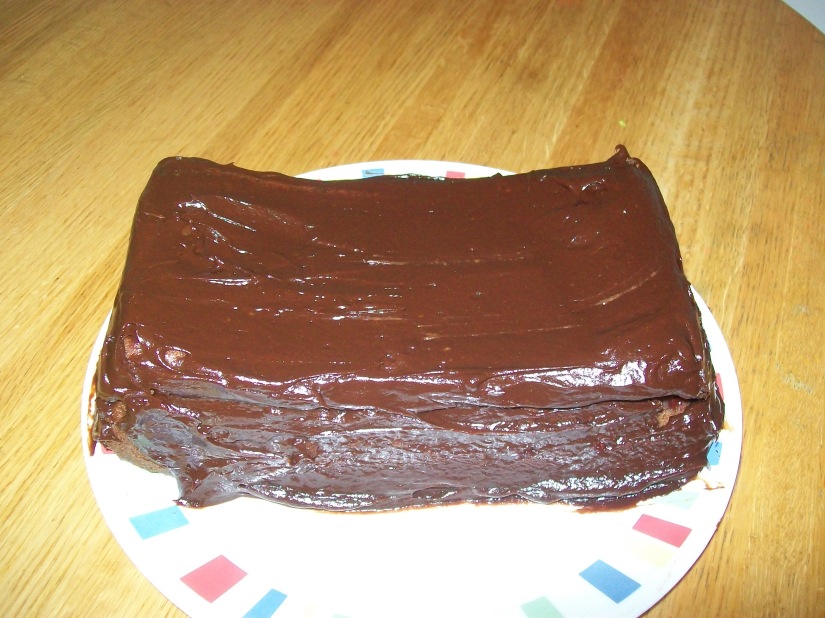 It’s not my best frosting job ever, and it doesn’t exactly match the “dressy” in the title, but the frosting was a bit tough to deal with because it was so warm and melty. I could have waited for it to cool a bit, but again, it was late and I wanted cake. 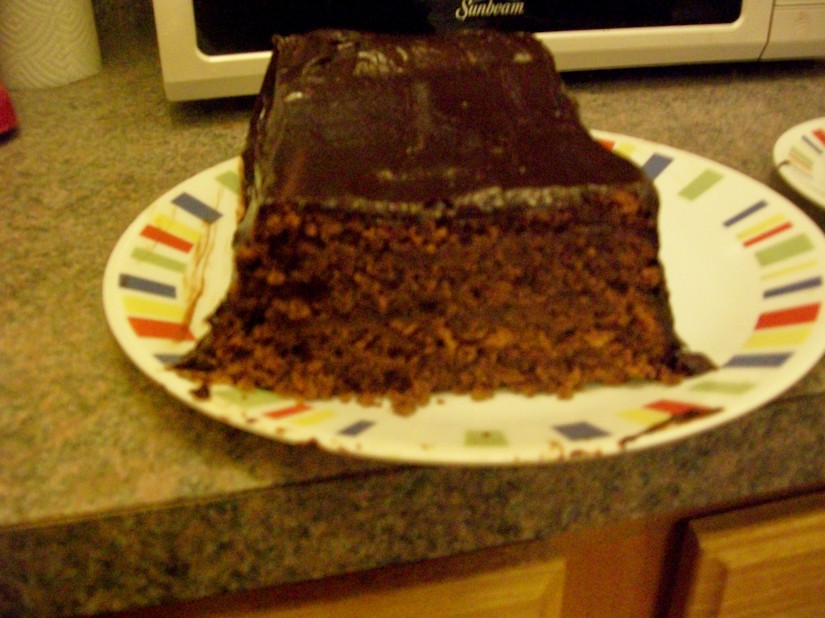 You can just barely see the raspberry jam between the three layers.

Upon taking my first bite, I was surprised that it actually tasted good. I was fearing that the lack of eggs was going to result in disaster in terms of taste, but I was pleasantly surprised. The cake was moist and rich, even without the additional chocolate in the batter. It’s okay in terms of chocolate taste, but not quite as satisfying as other recipes I’ve made. I’m still not a fan of the color of the cake, but once again, I’m becoming extremely nit-picky.

One final note about this cake. It’s definitely NOT a one-bowl cake. Thank goodness for my new mixing bowls, because I ended up using 1 bowl for the wet ingredients, 1 bowl for the dry ingredients, 1 bowl to make the filling, 1 bowl and one pot of simmering water to make the frosting, my 1/2 cup and 1/3 cup measuring cups, measuring spoons, the loaf pan, a hand mixer, a spoonula, a fork, a knife, two plates, and a spatula to make it. That’s a lot of dishes, and I finally got them all washed.

Overall this cake was a success, and I’m definitely going to make it again, albeit with a few alterations to suit my palate and aesthetics.

1 thought on “My First Night Back”