Written while waiting for my bus back to NYC on 10/9.

After writing the first section while sitting by the pond, I grabbed a hot chocolate at Dunkin Donuts and headed back down to the venue. There were some people waiting by the stage door, but for the time being I chose to enjoy my cocoa away from them. I waited near two other women a bit away from the door, and we started chatting about the lads and the women’s lads.

We soon scooted up towards the other fans because more Thunderheads were arriving. The security guards kindly asked them to stand on the bricks behind the granite curbing, but did they listen? No, they did not. At. All. Talk about unruly invasion of personal space once lads starting coming in and out.

I believe Paul came out first, and as soon as they say him, they literally MOBBED him. I didn’t even want to get near, because it was just crazy. Who knew middle-aged women could be so pushy and invasive. Instead, I took a picture from above and somewhat afar. Yay for being so tall and for the zooming abilities of my camera.

The same thing  happened as each lad came around. It was absolute insanity, and I felt bad for the lads. I really didn’t want to be pushy, so I only managed the Paul picture and one picture of Keith’s profile. Probably the most memorable part of that time of the day was that after Keith went on the bus, he came back out with his longboard (skateboard, not surfboard unfortunately). He stepped out to the sidewalk, got to the street, threw his board onto the street, and FLEW DOWN THE MIDDLE OF STUART STREET, seemingly without a care in the world. My gosh, though, that lad needs to be careful.

My respect/patience during the mob scene paid off in SPADES a little while after. First came George, who chose the quiet time after the insanity to bring Carrie and Sarah out to the bus. There were only a couple of us left, and he took some time to chat, sign, and pose. I only got his autograph again, and I really should have asked for a picture, but I got my autograph and it said “Love George Donaldson, XX” :D. He came out of the bus again later, and I managed to catch his eye, and he WINKED at ME! Love you too, George. I also failed at getting a hug, but oh well. I’m happy with my autograph and wink. I can still picture it in my mind, haha.

Keith went back into the venue after coming back from skateboarding, but he only stuck around for a couple of pictures, none of which were mine. I did manage to say hello to him, though, and he asked how we all were doing.

It was down to just Pierre the security guard and I hanging around the door, and even he disappeared for a bit. I was in the middle of calling my friend, and the last person I was waiting for FINALLY came out. DECLAN! Needless to say, my friend finally picked up as he came out, and I hung up that phone SO fast, without saying anything to her. I asked him if he could sign my picture, and he said he would come back after he put his things away (he WAS carrying a few things which would have made signing somewhat complicated), so I waited patiently for him to come back like he said he would (At least for the time being he had stayed within my eyesight, unlike George at Radio City. Oh goodness, I didn’t even tell Carrie and Sarah on him when I had the opportunity. My memory just goes to bits when I’m around all of them.). In the mean time, I called back my friend after that abrupt hang-up, and she completely understood why I did what I did.

And then . . . DAMO CAME OUT!!!! It was just ME AND HIM, and I asked him to sign my sick friend’s ticket. I told him he was her favorite and about how sad she was to have to miss the show. Maybe I could have also asked him to speak to her on the phone, I bet he would have obliged. He’s so kind like that. He personalized the ticket, which said “To Lexi, Love Damian Mc Ginty”. Most of the time they just sign their name, since they’re usually in a rush or being mobbed, so this was just great for her. She’s going to love it, even though it’s not a surprise anymore because I couldn’t resist telling her about it soon after. Damo asked if I would like him to sign my program (which I was holding at the time), and I said that would be wonderful! Once again, I didn’t get a picture with him. I’m terrible about getting pictures WITH them instead of just OF them. I love that this is the second time that he’s been JUST ME AND DAMO, one-on-one. They’re all so much nicer (I mean, they’re always nice) and more willing to stay and chat if it’s just one or a couple of not crazy people around. Any more and it gets crazy and overwhelming. Damo, I love you for our time together. No, actually, I ❤ you. 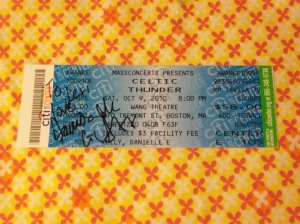 And YES, I KNOW his picture looks absolutely wonky. That’s what happens when you try to Photoshop a 17 year old’s face onto his 15 year old body. Nothing is in proportion because the head is too small for the body. Oh Sharon, couldn’t someone have enlarged his head a bit so it wouldn’t be SO noticeable?

After Damo went inside the venue, Declan DISAPPEARED! He had been outside his bus before Damo came out, and now he was GONE. I was so sad. I didn’t know where he went, since he was JUST THERE. Thankfully, he soon reemerged and I was once again thrilled. I asked him to sign the picture of the two of us, and he was more than happy to do it. He recognized it as being outside the very same venue as as being very close to where we happened to be standing. Then he asked if I wanted the front or the back signed, as we looked at each other and both agreed upon the back so he wouldn’t “cover up that wonderful face” of his. Then I giggled. . . . Oh the things that lad makes me say and do *shakes head*. I also didn’t ask for my Declan hug (and it was getting EVEN COLDER) or a new picture with him. Alas. I really need to work on remembering that for the December show. As he was leaving, I told him he was great at Radio City, he said “You were there?”, I said “Yeah”, and then he smiled and went on his way.

That was supposedly the e nd of see ing people, and by that time it was almost time for my friend to meet me at the venue, so I stepped over to the other side of the door to wait. While I was texting my other friend about Damo, RYAN came quickly by and we exchanged hellos. He had seemed grumpy-ish earlier, so I didn’t want to bother him.

All in all, it was a very successful afternoon, but I can’t believe I let it end without a hug from ANYONE. Silly me.  I keep saying “next time”, but really, how many more “next times” am I going to be fortunate enough to have. I can’t keep counting on definitely having them.