I can’t even begin to express the sadness I felt as I ate the last piece of this lemon blueberry loaf with a lemon glaze last Friday morning. While the lemon flavor was slightly over-powering, I think it was a fantastic first attempt at this recipe. For future baking endeavors, though, I think I’m going to cut down on the lemon and sugar so that it has a more subtle flavor, rather than a BAM *sour face* one (even though that was thoroughly enjoyable and made me think of Damo and his lemon love each morning). I’m not sure if I want to make this same loaf again Sunday morning, or if I want to try something else for next week. I’m going to have to have a look around the All Recipes site to see if anything new will jump out at me. Whatever I end up baking, though, I hope it will be just as enjoyable as last week’s breakfast was, especially to make up for my lack of breakfast this week (big mistake, because I realized I NEED to eat breakfast every morning).

In other lemony news, I tried my hand at making lemon squares a couple of weeks ago. I can’t believe what I’ve been missing out on. The recipes was SUPER easy, and the results were SUPER yummy. The little squares were “suitemate-approved”, and so now I know what I can make when I want to make a dessert for my suite, since one girl doesn’t like chocolate (I’m going with it, even though I can’t quite wrap my head around hating chocolate. Oh well, to each her own.). 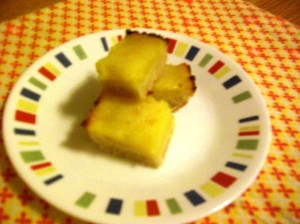 In non-lemon news, I made pancakes. They were also yummy. It was a tried and true recipe, so I wouldn’t have expected anything less than perfection.